Pruning lavender plants and bushes are essential at least once a year to make sure the plant is healthy and it lives longer. If you don’t prune lavender regularly, the plants will get woody and will produce fewer flowers. In this article, I will show you when and how to prune a lavender, how often to do it, and which tools to use for the best results.

When to Prune Lavender Plants

Pruning time is important, timing is seasonal pruning as well as pruning that depend of how old is your plant.

Seasonal Pruning – When is the best time to prune lavender?

You can prune lavender in any season, however, the summer pruning, done at the same time as harvesting is the best pruning time of the year and it should be the harder prune.

Early spring is good for a second pruning, which should be much softer than pruning in the harvest time. If you can’t do it in early spring, just skip it, as doing it late in the spring may damage young flower buds that are forming at that time. In this case, leave pruning for after the harvest which is usually in the summer.

If you missed all the above times, winter pruning is also an option. Just make sure you don’t cut too much of the plant. Ideally, winter pruning should be skipped as generally pruning encourages plants to regrow and if winter is very cold, the new growth may not be successful and may be prone to frost.

Basically, the time or season of the pruning depends on the climate you live in – If you live in a mild climate it is much easier to be successful than if you live in a very cold climate when freezing temperatures may damage recently pruned plant.

When I prune my lavender?

I prune my lavender at the harvest time which is here, where I live, in the middle of the summer (early July). After that, I just prune it a bit sometime in mid-October, just to make sure the bushes are kept nice and rounded. Another soft pruning time is in the early spring when I cut again just a bit – just a few centimeters.

Another important thing to consider when deciding when to prune lavender is to know that lavender plants need three years to become mature. So pruning in year one and year two should not be the same and from year three onwards, you can prune in the same way.

For a first-year plant, keep your pruning soft and avoid any drastic cuts. The danger is that if you cut too much, the new baby plant may not recover. That’s why it should be cut back just a bit – few centimeters, just to keep it nice, rounded, bushy, and compact.

This way the plant will balance root and leaves growth which is very important in this stage. In the above photo, you can see my one-year-old lavender plant (grown from cuttings) that needs just a one-centimeter cut in the early spring.

In its second year, plants are much larger, already producing some flowers, but not a lot. For this stage, choose harvesting time (mid-summer or early autumn) to prune 8 to 10 centimeters above the woody bits. Cut it in a way that forms a rounded shape.

On the below photo you can see my two years old lavender plants – they just started to get bit bushier.

In its second year, some plants already blossom so they are ready for pruning. Just trim it back slightly to stop it from going woody and to encourage nice shape and lush branches.

In its third year, lavender is considered to be a mature plant – large and rounded, producing a lot of flowers.

This is the year when the full harvest is expected so just before the buds start to open, harvest your lavender and at the same time prune it too.

Cut off at least one-third of the new growth or, you can do it even mo vigorously and cut down up to just 5 centimeters above the woody part or two leaf sets above the woody growth, whichever is longer. Be careful not to overdo it.

This is the time when you also start with drying lavender flowers and very soon after that with using and storing.

From now on, in following years, prune the plants in the same way.

On the below photo you can see my three years old lavender plants in full blossom – right time to harvest and prune.

The basic tool to prune lavender is garden scissors or pruning shears. For larger plants, use garden loppers, preferably bypass loppers, as they are more efficient. Pruning lavender with a hedge trimmer is also possible but be careful not to cut too much of the plant.

If most of your lavender is gone woody, you should prune it again just up to the two sets of leaves above the woody part. If you prune it lower, the plant may not recover. That’s why regular pruning is important to avoid bushes going woody and looking unsightly.

In this video I am winter pruning my lavender bushes, removing some woody parts in hope to recover part of the plants – have a look:

What happens if you don’t prune lavender

Pruning lavender regularly is an essential part of looking after the plant to stop it from getting woody.

If you don’t prune lavender at least once a year (twice is recommended) you will get large woody stems as opposed to nice, lush green foliage.

If you don’t cut them back annually, the woody parts will get bigger and bigger over the years and you’ll end up with less productive plants, with fewer flowers and less green foliage. These plants also live shorter and often their branches get split and broken. Unpruned lavender plants have a short lifespan. 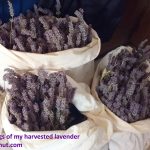 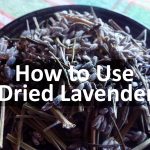 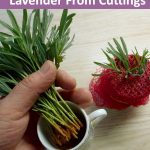